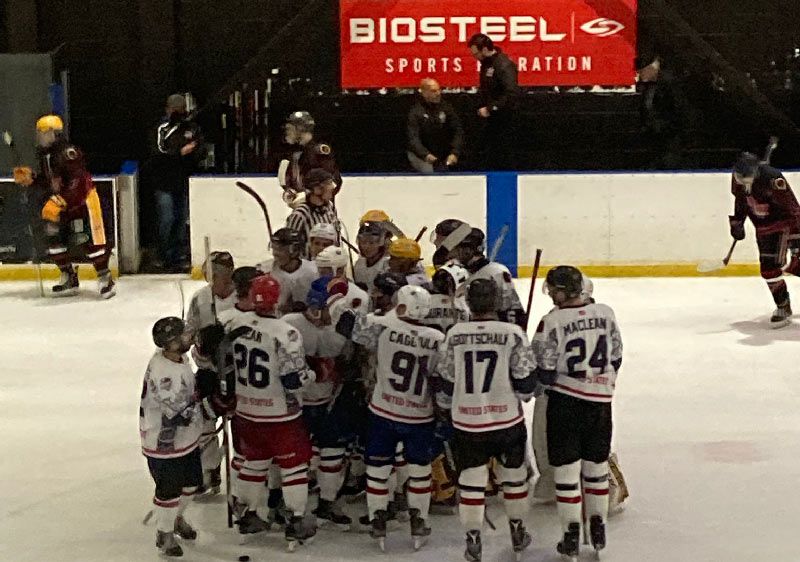 The Ice Hockey Classic held the IHC Showcase at Paramount Ice in Thornhill Saturday night for those who missed it. People from all corners of the globe tuned in as a group of pro, college, and junior level players faced off representing Canada and the USA. The Americans were able to hold off a seven-goal comeback against Canada winning 8-7 in Overtime.

The USA got off to a strong start, dominating play for most of the first period. Just before the halfway point of the first, Drake Caggiula (Buffalo Sabres) would find Grayden Gottschalk (Laurier Univ.) on a backdoor pass to open the scoring for the game.

A late powerplay for the Canadians gave just enough light for Ryan Penny (Coventry Blaze) to bury a one-timer past Stefano Durante (American International College) to end the period.

A goaltender switch halfway through the second saw John Lloyd (Aurora Tigers) and Owen Baer (King Heights’ Academy) go in the net for Canada and the USA respectively.

The Canadians had seemed to find their footing in the second period, forcing Durante to make some stellar saves. Durante’s stellar play gave the Americans some momentum as Ryan Hunter (Cochrane Crunch) would give the Americans a 3-1 lead.

The Americans would get contributions from Gottschalk, Budd, Slater Doggett (Belfast Giants), and Zenon Konopka (Buffalo Sabres) to leave the second period with a demanding 7-1 lead.

Canada would come out with vengeance to start the third, scoring just 30 seconds into the third period as Jake Smith (Birmingham Bulls) would open the scoring in the third period. Another Canadian goal by Matthew Ferrari (Laurentian Univ.) would quickly be answered by a breakaway goal from Caggiula to make it 8-3.

What could have been the back-breaking goal for Canada, only ignited them as Matteo Peca (Cochrane Crunch) started an offensive explosion for the Canadians. Goals by Connor Van Weelie (Aurora Tigers,) Kevin Noble (Coventry Blaze), and Jake Smith would bring the Canadians to within one with less than eight minutes to go.

It appeared that the Canadians were running out of time before Anthony Repaci (Orlando Solar Bears) was able to beat Baer with just 31 seconds left in the third period to send the game to Overtime.

The Americans had a few good chances in Overtime before Tyler Davis (Laurier Univ.) snuck past the Canadian defense and buried it under the crossbar to win it for the Americans.

This was a great event and a lot of fun to attend, a big congratulations to Kerry Goulet, Toni Miil, and the rest of the Ice Hockey Classic team for putting on this event. Also, we’d like to give a shoutout to the broadcast team of Nico Cardarelli, Steven Ellis, and ParaSport TV, the staff at Paramount Ice, and all the sponsors for making this a special event. Additionally, we’d like to thank our partners in Australia, the Agile Group, and the Kaurna Boomerangs out of Adelaide, for their continued support over the years.